Saving money on airfares usually requires buying a ticket far in advance of traveling.  If it’s an expensive ticket, that can be nerve wracking.  Illness and emergencies can change plans, and discount tickets sometimes are nonrefundable.

The cheapest ticket isn’t always the best. Make sure you research the airline you’re thinking of flying with.  Some of them are known for bad service.  If you’re on a long haul flight, the couple hundred buck savings isn’t worth it. The easiest way to research the carrier is to Google “Name-of-Airline reviews.” That will hook you up with sites where travelers give reviews and horror stories.

Finding a lower fare sometimes takes a lot of looking. The big, well known agencies like Orbitz and Priceline don’t carry airfares on their sites for low cost carriers like Ryanair.  With some airlines, the way to find the best price is to use their own website.

Discount airfares are great as long as things go well. But what happens when something goes wrong? Will you have a problem getting in touch with the website where you bought your ticket if you need help? I got a good price on a ticket to Mexico a couple of years ago through an internet-only travel site. While I didn’t have any problems, someone I knew did. She told me that on her return trip, the flight had been changed but she hadn’t been notified. It ended up with a frantic search for a return flight and an extra-long layover which hadn’t been anticipated.

I now book my flights with Best Travel, which I found on one of my many internet searches. They have discounts not available even on the airline’s own website. How they do that is best explained by Best Travel on their own site. Their office is in California, and I’ve found them to be very responsive by email. I used them for my Ghana trip and now for India.

I didn’t go for the rock bottom cheapest  fare for two reasons. The lowest possible fare was with an airline that got almost unanimous bad reviews for poor service. Another low fare possibility was a direct flight. I can’t bear the thought of  being cooped up in a sardine can for 16 hours. Instead, I chose to spend a few hundred dollars more for a flight where I have long layovers in Amsterdam.  The trip will be longer, but the ability to get off the plane and have enough time to take a stroll in downtown Amsterdam was far more appealing than being a prisoner in a cramped economy class seat for 16 straight hours.

Another great site I’ve stumbled across is  seatguru.com. Here you can find diagrams of seating charts for every type of aircraft, enormously helpful if you’re able to select your own seat when you confirm your flight.

I still don’t like paying for my airfare ten months in advance, but I’ve never not used the ticket. I don’t buy trip insurance, either. 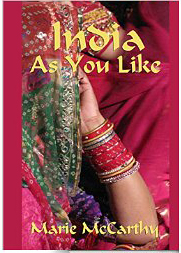