Bharti slices the miserable bag of apples for our miserable breakfast in this miserable town.

The next morning it was raining hard, which delayed our departure and meant there would be no time for Shahi and Bharti to visit Meherangarh Fort. Once it let up, Rafiq and Madu took off to see if they could find a restaurant open for break fast. Everything was closed:  restaurants, markets, everything! It wasn’t a holiday, it was just Jodhpur. I started really not liking this place. You can find a restaurant open in Udaipur any time of day, in season or off season. All the guys could find to bring back for us was a bag of apples.

Our day didn’t get any better once we got on the road. Our destination was Osian, only a couple of hours away. But the rains turned a dry creek bed into a river gushing over the road. We saw a man up to his waist in water gingerly crossing the stream. Only big trucks like this one were high enough to cross the rushing water without the engine stalling and heavy enough to cross without being carried away. Everyone else was turning back. We were willing to skip Osian and head straight to Jaisalmer, but Madu was now determined to get there. He wanted to try crossing the water, but we all said it wasn’t worth the risk and convinced him to turn around. It was another day like the day before:  asking directions of everyone we met, getting different and confusing answers, and going down lots of rutted roads. But this time, the roads had water features. 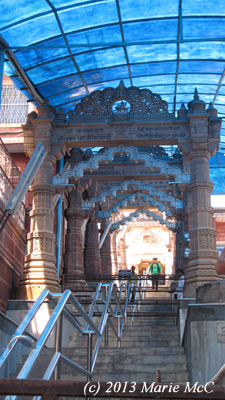 When we reached Osian, it was blazing hot. We had come to this little known town to see the Sachiya Mata Sun Temple, which none of us had been to before. It had a series of archways preceding the temple entrance which are now covered to protect visitors from the oppressive sun. That made it much more pleasant, since you would otherwise have had to go barefoot up hot marble stairs. Visitors to temples must always remove their shoes before entering. 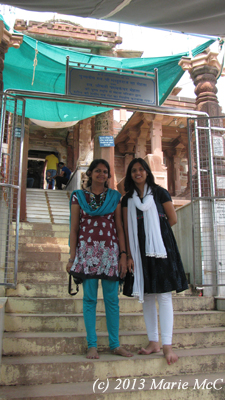 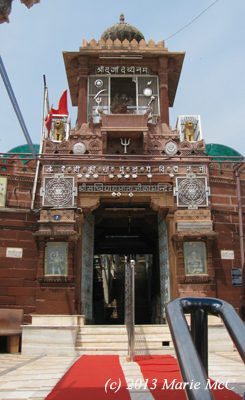 Even this short uncovered spot gave you the hot foot. Yeow!

At the top of the stairs, the temple was small and unassuming from the outside. Inside was a small, disappointing room with way too many electrical wires snaking around and rusted fixtures. This was not a marble beauty like Ranakpur. The walls and columns were covered with cheap ceramic tiles, many of which were broken or missing. It was also smoky from years of burning incense.

What was interesting was the mosaic mirror work on a few of the columns. It looks much better in the photo than it did in person. 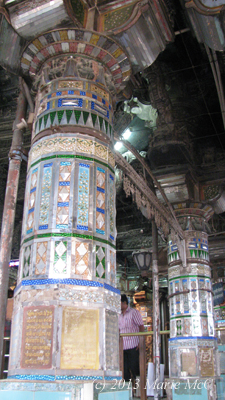 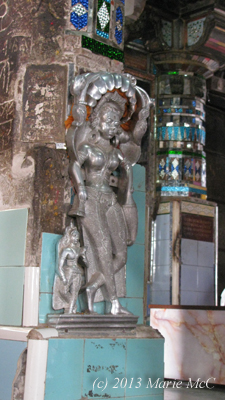 Temple visits always include a prasad: an offering of an overly sweet, mushy cookie.

A prasad is little more than a small sugar bomb. I had one on my first visit to India, and I wouldn’t say it was one of my favorite tasty treats. I now manage to be somewhere else when they pass those around.

A shop selling religious accessories near the temple.

On the way back to the car, a woman was following close behind me, yammering all the way. At first I thought she was talking on her phone, but every time I stopped to take a picture, she stopped. And every time I continued, she continued, yapping nonstop. Then she started making the eating gesture, and I knew she was a beggar. Pushker and Rafiq told her several times to leave us alone, but like the sun, she was relentless. If you’re in India any length of time, you’ll soon reach a point where the constant assault of ceaseless hordes of beggars will render you pitiless. Foreigners attract them like flies. It was brutally hot, I was cranky, and I wasn’t inclined to give her anything. No one else did, either, so it wasn’t as if I were the sole heartless one. 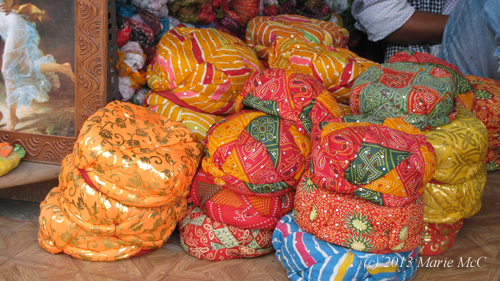 Ready-to-wear turbans for sale in Osian.

As soon as we got into the car and pulled away, we began laughing about it. Silly me. I had been taking pictures of everything else. I should have taken a picture of her.

My last day in Delhi had come all too soon. In contrast to the comfortable temperatures and rainy weather when I arrived at the beginning of March, 28 days later it was uncomfortably hot.

Prem took me to the Lodi Gardens Restaurant for brunch. The outdoor tables and chairs were draped in red cloth.  It was so pretty!

The outdoor booths had filmy,  flowing cloths around them, too, which reminded me of a tent.

We took a walk in the Lodhi Gardens, which is a favorite spot for Delhi wallas (people who live in Delhi) to have picnic lunches. 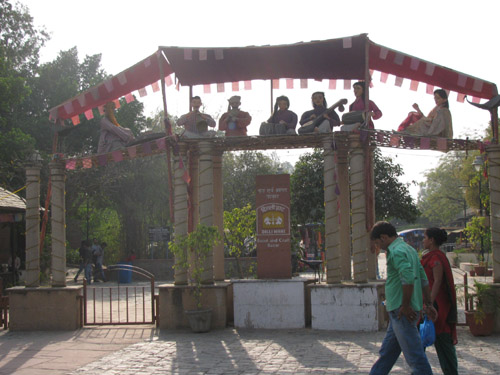 In the afternoon, I wanted to go to Dilli Haat, which I had read so many glowing reviews about. Prem tried to dissuade me, but I couldn’t think of anything else to do, so we went. 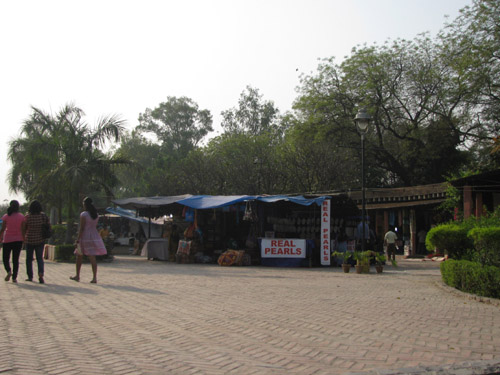 It looked like it had seen better days.  Compared to the merchandise I had seen elsewhere in Rajasthan, and even at the other Dilli Haat location, there was nothing here that was even slightly tempting.

“Third quality merchandise,” Prem sneered. If anyone would know, after all his travels in Rajasthan, I would think Prem would. I agreed with him, and he teased me relentlessly for coming. 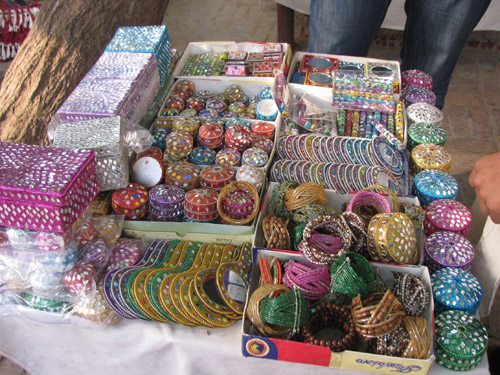 There was no doubt, there was a huge amount of cheap trinkets for sale here.

We moped around the rest of the day, thinking about how we would be parting ways very soon. The time finally came to take me to the airport.

What an incredible trip it had been! India had been every bit as magical as I had anticipated and even surpassed my expectations in many ways. I had seen some fabulous sights and met wonderful people.

I was really going to miss Prem. He had been such good company, and we had developed a friendship during our month-long journey. But I was trying not to feel sad. Prem had invited me to come visit him and stay with his family at his village home in Himachal Pradesh, and I had accepted. During this trip, he had spoken often in glowing terms of  “my North India” at the foot of the Himalayas, and I was going to see it.  I’m now planning to return to India in November 2012!

After Akbar’s Tomb, it was time to leave Agra, get on the highway and head back to Delhi.

At lunch time, we stopped at a very attractive motel-restaurant whose name I didn’t see. 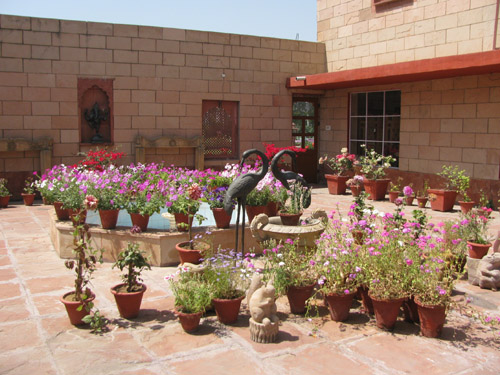 Just after the entrance gate was a courtyard full of potted flowers. 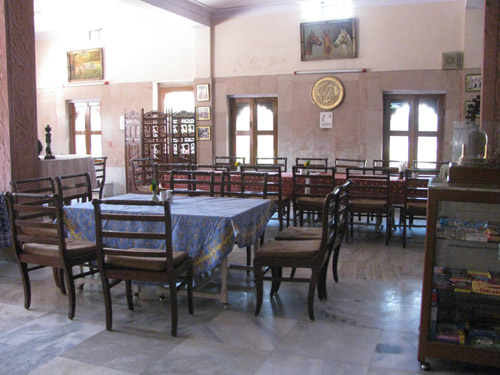 I had the dining room to myself for only about five minutes before a busload of tourists nearly filled it.

The ladies room attendant was a pretty young woman who was flattered at my request for her photo. 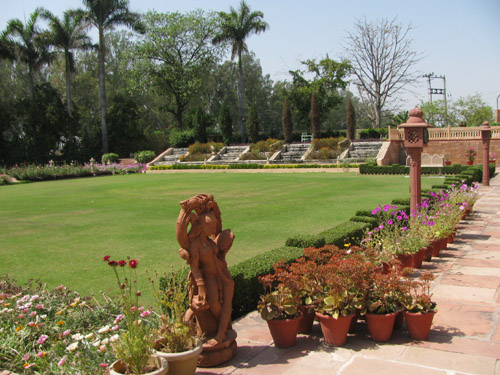 The hotel garden was impeccably groomed, but it was far too hot to enjoy the outdoors. 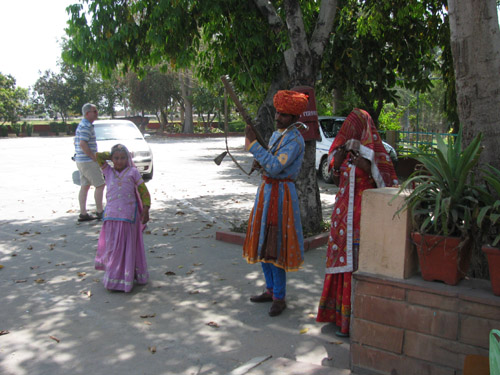 A Rajasthani family at  the edge of the parking lot was giving a lackluster, dispirited performance of traditional music. It was almost depressing.

After lunch, Prem and I were back on the road. We reached Delhi by midafternoon. The next day would be my final day in India before returning to the States.

Lapis lazuli, carnelian and malechite to be used in inlay work.

White marble deposits of the same kind as were used in the Taj Mahal’s construction are still abundant in this area. I stopped to buy a few souvenirs and learn how marble inlay was done.

The work is done with extreme attention to detail. Placement of the designs on the marble pieces is not done freehand. I saw the man in the white cap at one point using a protractor to place the designs on the piece he is working on.

The marble is first painted with a temporary orange stain so that the designs can be seen when they are traced onto the piece. The workers painstakingly gouge out the places where the inlay goes. Indian marble is extremely hard. The work is difficult and time consuming. 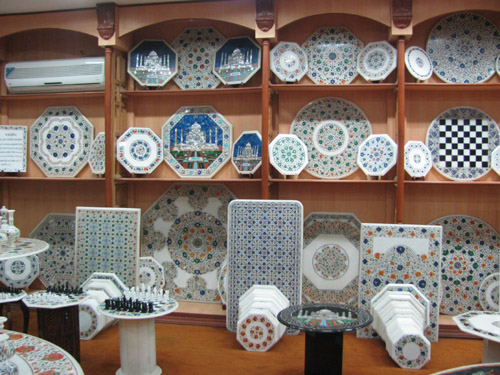 Despite the amount of time it takes to create these pieces, labor is cheap in India. The cost of these works of art are determined more by how much inlaid work is done on the piece. Only precious or semiprecious stone is used as inlay.

To commemorate my visit, I chose a few small marble pieces. In the bottle is a soil sample taken from the gardens at the Taj Mahal. The small stones are from the Bada Bagh cenotaph garden at Jaisalmer.